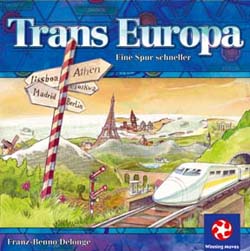 I was unable to make it this week but Steve sent me a report.

The second game was a 30-minute filler called Trans Europa. This game is a map of Europe covered with a grid of triangles. Each player gets 5 cards; the cards have cities on them, one from each area of Europe. The players then build a railroad network using the triangular grid to get them to their goal of linking the 5 cities shown on their cards, but in doing so also will inadvertently help the other players achieve their goals. Each round someone links their 5 cities and the other players lose points based on how far they were from completing their link.

Mark G was the man for this game; his ability to link up his 5 cities whilst the rest of us were floundering was amazing. I was always 2 or 3 turns away from completing my route when Mark announced his success. Iâ€™m not sure were I went wrong as each time we played I felt that I had a reasonable chance of success and each time fell miserably short, although from the moans and groans of the other players I was not alone in my thoughts. We did have a new-comer playing called Adam and as the game was won when one player reaches zero, the game did come to a quicker end then perhaps it would have as Adam found himself quite some distance from his final objective after the second set of routes, so much so that he needed to win the next round to stay in the game. As the more experienced players were not losing at quite such a rate, we might have had more time to recover, but I feel that it still would have ended with Mark G winning, just taking a little longer.

I did like the simplicity of the game and I felt that I would have quite liked to start a fresh game straight away. For strategy on winning however, you would have to ask Mark G!