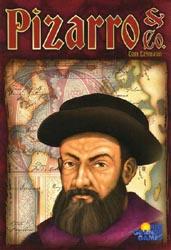 This week, we started off with the excellent auction game, Pizarro & Co. Itâ€™s a while since we last played it and, as a result of us forgetting the relative values of things, Nige got a very cheap James Cook on the first auction. Things soon tightened up, however, and it was difficult to tell who had the best position until things were totted up at the end. If the last couple of auctions had gone differently, Nige would have got the necessary points on his James Cook expedition to win. However, I was shunted out of a Pizarro auction by Mark G with a bid of about 45, so I took the Cook auction but it wasnâ€™t quite enough for me as â€˜dark horseâ€™ Steve had completed his expeditions cheaply and had enough gold cards left in hand to ease past my total. 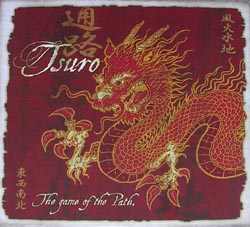 We then turned to Tsuro which is a very quick connections game. Players add a tile to the game board and follow the path created by that new tile. Eventually, the paths meet up and players are forced to follow paths placed by others. If these lead them off the board, the player is eliminated and the last person left alive wins.Â Â

This is a very simple game and there doesn’t appear to be a lot of control one can exercise in a 6-player game. Undoubtedly, there would be more control as a 2- or 3-player game, but 6 players is a fun romp. Now, we agreed at the start that we all had to make sure that Steve lost this game but Nige clearly wasn’t paying attention as the first damage he could cause was to join my and Mark K’s paths together, eliminating the two of us together. Meanwhile, Steve managed to tuck himself away from everyone else and watched while we all conspired to jump off the board in pretty swift order. Another win for Steve. 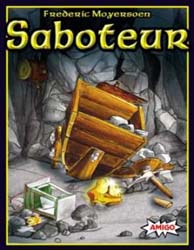 The final game of the evening was Saboteur, which I’ve been wanting to show the rest of the group for a while. Actually, John already had a copy but his prior knowledge didn’t do him any good (and neither did mine). The game is played over three rounds and most of the players represent hard-working dwarves, tunneling in the ground searching for gold. However, one or more of the group may be traitors trying to stop the rest from their goal. Players either play a tunnel card to extend the network towards (or away from) the gold, or they play an action card to hamper the progress of another player or help themselves. If the gold is found before the deck is exhausted, the good dwarves share some gold (not always evenly). Otherwise, the traitors receive a fixed amount of gold. After the third round, the player with the most gold wins.Â Â

This is a fun end-of-evening game with lots of bluffing. The first round, the good dwarves won quite easily but, in the second, their fortunes were reversed. I had all the decent tunnel cards and my fellow goodies were highly incompetent in freeing me from the tirade of broken picks and lamps that were sent my way. In the final round, Mark K found it tough going as the only traitor and the good dwarves emerged triumphant. The bad news, however, was that Steve clocked up a third win of the evening (this time shared with Mark G). The Hall of Fame is looking very depressing for the rest of us.