2015 saw me play 314 games of 205 different titles and 110 of these were new to me during the year. Comparing this to previous years, the games played are down a bit on last year but still significantly above previous years:

My most played game was Codenames which saw 8 plays, closely followed by Roll for the Galaxy with 7. Only five other games had 5 or more plays (Baseball Highlights 2045 and The Game .. spiel so lange du kannst with 6 plays each and 7 Wonders: Duel, Crazy Coconuts and Hostage Negotiator with 5). 3 games were played four times, 14 were played three times, 37 were played twice and 144 of them were played just once. My unplayed game list started 2015 at 42 and fell down to single figures at one point but is currently sitting at 20. I need to get this down to single figures again fairly soon this year.

My six picks for the best games I played for the first time in 2014 were Roll for the Galaxy, Codenames, Mysterium, Quartermaster General, Stockpile and Staufer Dynasty. As with last year, I’ve also done a six picks of solo and two-player games featuring 7 Wonders: Duel (probably my favourite game of all in 2015), Trambahn, Patchwork, Baseball Highlights: 2045, Risk: Star Wars Edition and Sylvion. All in all, a pretty good year. Let’s hope 2015 is just as good.

I spent a good chunk of the year on my 2015 challenge to reduce my collection by 365 games by the end of the year. I actually managed to sell 410 games and, having done some tidying up of my collection here on BGG as well as my Trickylight site database, I now reckon I own 617 games a huge reduction on the 1,000+ games I have owned in the past. I’ll probably still look to trim that number further during 2016 but not to the same extent as this year’s effort.

During December, I managed to play 19 games of 16 different titles, 5 of which were new to me. The new games were:

Geister Geister Schatzsuchmeister – This is a fun and simple co-op game about grabbing treasures from a haunted house before it gets completely over-run by hauntings. Although this was the German Kinderspiel des Jahres in 2014, it’s still fun and challenging for adults.
TIME Stories: The Marcy Case – The second TIME Stories scenario is another horror-themed affair that, on a first run through, didn’t seem as challenging a puzzle as the Asylum. Maybe it’ll ratchet up the further we get into it.
maskmen – My latest Japanese micro game from Oink Games is a wrestling themed card game about getting rid of your hand of cards before your opponents. Works nicely as a two player game and very quick.
8-28 – This bluffing and second-guessing card game is a nice variant of Blackjack where you’re trying to get cards totalling as close to 8 or 28 without going over. Not sure it’s one to play regularly but enjoyable once in a while.
Risk: Star Wars Edition – This is a battle game based on the finale of the Return of the Jedi film, where the Rebel Alliance is trying to blow up the Death Star, but the game is fought on three fronts: the space battle, the battle for Endor where the Rebels are tring to dismantle the shield generator, and the fight between Luke and Darth Vader on the Death Star itself. Great fun.

My unplayed list is up from 18 to 20, and my Game of the Month was the fantastic two (or four) player battle game, Risk: Star wars Edition. 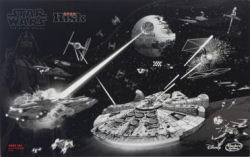