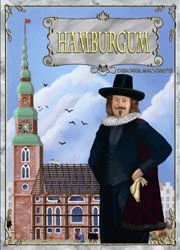 This week, five of us tried out Hamburgum, the latest game by Mac Gerdts and published by eggert spiele / Rio Grande. The game uses the now familiar rondel device (Antike / Imperial) for players to select their turn actions but, unlike the previous games, there is no real conflict – rather it is the economic aspects of play that are important.

The game is about the development of the city of Hamburg in the 17th century and centres on the city as a trading centre and the building ofÂ its mighty cathedrals. Using the rondel, players choose ontheir turn between several actions: Producing one of the goods for which the area was renowned: sugar, cloth or beer (we are in Germany, after all); building ships which can then be used for selling your goods; trading – either selling goods that you have acquired via your ships (or, for less income, theÂ local market) or buying raw materials (stone or timber or occasionally a church bell); using your raw materials to construct buildings around the city (each of which will convey a benefit either immediately or later in the game); or finally making a donation to the church. Each donation contributes to building one fifth of a cathedral and in return the player receives a token which can be cashed in during the game or at the end for prestige points. Once the six cathedrals have been completed, the game ends and whoever has accumulated the most VPs wins.

In our game, I was the start player so, with a lack of cash, chose to produce a good and ship two to gain the cash to affordÂ 6 materials which, in turn, enabled me to construct three buildings. John followed a similar route but was not as bold in terms of spending his cash. This seemed to set him back a bit. Later in the game, Nige made a big play for ships and, having obtained the 2VP per ship donation tokens started to rake in the points. He made a slight mistake by not cashing all his tokens in when he had all five ships in harbour and missed out slightly when Mark K followed the same route through the dockyard toÂ reduce Nige’s fleet. MarkÂ  did build himself for lots of points at the end through lots of donations to the church but he had, in the meantime, fallen a bit too far behind with the in-game point scoring. My good start faltered towards the end and recognising that others were going to beat me to the richer spoils, chose to just keep accumulating goods. Fortunately, I just had enough to keep ahead of the others and was happy to see my first victory of 2008.

Hamburgum is another game that makes good use of the rondel and I think I prefer the economic emphasis in this game slightly more than the other games. There look to be a number of different strategies to try out and it will be good to experiment with another path next time.