Well the list of 200 games originally nominated has now been reduced to 25. Voting now takes place to pick the three winners with the results due to be announced on Friday 17th June. The full list of finalists is:

Well three of my nominees didn’t get through: Dragonheart and Mr Jack Pocket are both light two player games so I’m not surprised these didn’t receive the same support as their bigger box cousins. Seeland was probably my last pick so again not too upset about that. My votes for the three winners are going to 7 Wonders, London and Navegador. However, I’m really surprised at how many of the 25 finalists I haven’t played – 11 to be precise, although I own two but haven’t yet played them (Kaigan and Vinhos).

Over at the Spielfrieks user group, the first round of nominations for the 2010 Meeples’ Choice Award is under way. From a list of 200 games released in 2010, people vote for their 10 nominees and those 25 with the most votes go through to a second round of polling. From this smaller selection, people can pick three games and the three with the most votes are then declared as the recipients of this year’s award.Â

There were a few games I was surprised weren’t included in the long list, such as The Resistance, Rallyman and Telestrations (although, on checking,Â the last of theseÂ was actually included on the previous year’s list). Anyway, I voted for 7 Wonders, Dragonheart, Fresco, Glen More, Key Market, London, Mr Jack Pocket, Navegador, Seeland and Sid Meier’s Civilization: The Board Game. The one game IÂ expect I would have included had I yet played it is Vinhos but I expect there will be others who vote for it and I may have managed to play it before the final round of voting.

I’ll publish the results here when they are announced later in the month. 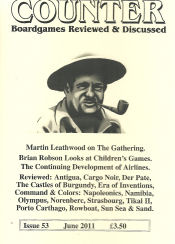 Issue 53 of Counter magazine is now out, running to 84 pages. There are articles on The Gathering 2011 and the games Martin Leathwood got to play while there, a comparison of the three versions of Alan Moon’s Airlines that now exist, and a guide to fun, noisy and quiet games.

On the review front, there are twenty full reviews, including Cargo Noir, Castles of Burgundy, Olympus, Strasbourg and Tikal II among others, plus there are three mini reviews by Ben Baldanza and a couple of children’s games covered. The usual letters pages, Mike Clifford rambling and look back at the games from five years ago round off another excellent issue. 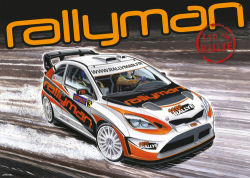 I played several good new to me games this month. Most played was the Lord of the Rings Card Game, which is interesting as a solo effort but i’m not sure I will be getting the monthly add-on packs. Biblios was a really nice quick card game and Pergamon was a fun game about archaeological digs and museum exhibitions. I also really liked the Keltis card game, possibly more than of the other variants. Any of these could have been the winner but, by a nose, Rallyman gets the plaudits (although I’m hoping we can get the time down a bit).

The unplayed games list is down to just 6 so, unless I go mad buying stuff at UK Games Expo, I may be able to polish off the rest this month. We’ll see!